Subtitle: The Eye-Opening, Hope-Filled Friendship of a Pastor, a Rabbi, and a Sheikh

Recommended to me by: David Mitchell

Somewhere along the way, I acquired the mistaken idea that “interfaith” is a watered-down, lowest-common-denominator version of religion. This book makes clear that interfaith is a vibrant, active process of building connections and understanding.

The book is both a practical guide to interfaith work and the story of how the three men’s friendship developed. It includes their backgrounds, key beliefs from their religions, difficulties they have with their religions, and their descriptions of a challenging group trip to Israel. As each of them write in turn, I come to trust their inclusiveness, openness, and willingness to face difficult truths.

I was interested to notice that despite my Jewish heritage I resonated the most with Jamal’s description of Muslim practices, which are focused on compassion. In writing about Israel, he mentions his sense of Ein Gedi oasis as a sacred place, a sanctuary. I have long described it as my favorite place on the planet. In the middle of the desert, near Masada and the Dead Sea, it feels like a miraculous gift to be enclosed in rustling bamboo with water flowing down the path.

Their suggested steps for interfaith work are

To me these steps form a bridge across many types of difference, including racial and cultural differences.

Subtitle: A Woman’s Journey from Christian Tradition to the Sacred Feminine

Recommended to me by: Donna Smith

Sue Monk Kidd describes her awakening to the patriarchal values of the Baptist Church and Christianity in general. She describes her transformation in parallel with the myth of Ariadne as she claims the Sacred Feminine instead of an exclusively male spirituality. The writing is clear, evocative, and rich with references to other works, mostly written by women.

As Donna reminded me, the author isn’t required to get everything right at once. She sees her submissive, secondary position, names it, finds a spirituality grounded in the feminine, and dares to speak truth to power. At the same time, she does not name the privilege that allows her to risk marriage and career (but ultimately lose nothing), and travel to Greece for inspiration.

By the end of the book, she notices a solidity and inner authority born out of her search. I believe this is the goal for each of us, to listen inside for the Sacred.

Subtitle: A Guide for the Spiritually Sensitive Person

Judith Blackstone helps people get more present in their bodies to realize their spiritual goals. She specifically helps spiritually sensitive people. I hadn’t encountered that phrase before, but it fits with my ideas about sensitivity in general: permeability and attentiveness to the environment and surrounding people.

Her emphasis on lived experience rather than imagined visualizations resonates for me. Her process matches my intuition about going “down and in” rather than “up and out” to meet my spiritual self. She writes that the answer to permeability is to inhabit ourselves more fully, not attempt to wall ourselves off. “When we experience life from within the body rather than from its surface, we find that we can relax our protective vigilance to the world around us.”

She describes a set of exercises called the Realization Process and gives several examples of assisting people to do them.

The exercises start with getting present in one’s feet. Not just aware, but present. When I do that, it feels wonderfully like being a gorilla, walking around on my hands. I can get present in my legs while biking, and feel them alternately rising and pushing down.

Recommended for anyone who feels they don’t quite belong here and would like to feel more connected to their body and their life.

I remember a feeling of exclusion when I read Kornfield’s The Wise Heart, so I read this one warily, and indeed, it did not resonate with me.

Perhaps it’s a target market problem. The writing is clear and kind and detailed, aimed at someone who has never thought about these issues before. I’ve been meditating daily for 9 years. I’m searching for spiritual assistance at a deeper level than (paraphrased), “Yup, we all have problems. Let’s sit with them awhile.”

The writing is gender-neutral and does not focus on class or race. In only one quote is “man” on the Way, but that gender exclusion is not footnoted. Subtly, through the examples and stories, I get the impression that Kornfield is speaking primarily to other white men like himself, wealthy enough to see the Dalai Lama’s personal physician for an ailment.

I feel uneasy when I see “My teacher Sri Nisargadatta explained …” and “My teacher Ajahn Chah said …” mixed with quotes from the Dalai Lama and Black Elk. I’d like to learn about a teacher’s culture and context in detail rather than hearing a mix of pull quotes from around the world.

I also recognized several of the anecdotes from the prior book.

I might have tried the included CD of meditations, but a previous library borrower had replaced it with an old Loreena McKennitt CD.

Recommended to me by: KBOO interview with Nathan Englander

These beautifully crafted stories are rich, in the sense that I can’t read too many of them at a time. They are heavy with the everyday pain we cause each other, and with the specific pain of Jews and Judaism.

I didn’t read them all, but I’m adding the book anyway because I’m still thinking about the characters and stories I did read. 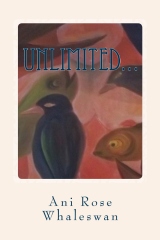 This is a book of 18 poems and 13 paintings about Ani Rose Whaleswan’s healing from extreme abuse. From the back cover: “She believes too that art is healing, and healing is an art.”

The paintings are colorful, vivid, powerful. Each one is accompanied by a paragraph of background or interpretation.

The poems are concrete, metaphorical, full of truth and clarity.

“Life is abundant in the soft places
The broken spaces between hard things.”

Recommended as a window into individual and universal healing.

Subtitle: A woman explores the transforming – and, paradoxically, healing – experience of being ill

Recommended to me by: a client

Alchemists strive to turn lead into gold by heating it alone in a sealed container, a crucible. In the crucible of Chronic Fatigue Syndrome, Kat Duff turned inward and found healing in the stillness and isolation forced by her illness.

Weaving together symptoms, dreams, mythology, Jungian psychology, and alchemy along with anthropological research into illness and healing, Duff reveals new perspectives on illness. Instead of being an assault or a punishment, illness can be a natural consequence of our history as individuals and communities. She sees her illness as an agent of healing both for sexual abuse she suffered as an infant, and for the land theft her forebears committed against the Sioux tribe in Minnesota.

Duff is careful to avoid the painful idea that “sick people are personally responsible for creating their illnesses through some kind of wrong-thinking or wrong-doing.” Sickness isn’t bad. It just is.

She relates a story about Nan Shin, a Zen nun diagnosed with cancer and struggling with guilt and remorse.

Then an old friend, who was also a Zen student, visited. He threw his arm around her shoulders and wisecracked, “Good Karma, huh? Brings you close to the Way.” Shin wrote later, “The jolt I felt then showed me very clearly that I had been thinking, Bad Karma. Within a fraction of a second the molecules turned themselves round and reorganized. I am flatly grateful to him forever.”

Unfortunately, Duff conflates illness with disability, and occasionally uses phrases like “confined to a wheelchair.” People are not confined by wheelchairs any more than people are confined by bicycles, cars, or any other device that assists mobility.

I recommend this book for its kaleidoscope of new perspectives about illness.

Subtitle: Chronicles of the Worst Buddhist in the World

Recommended to me by: Bay Area Spirituality Bookgroup

Mary Pipher didn’t expect to become famous for writing “Reviving Ophelia” and she fell into despair after years of touring and speaking engagements. The book covers her despair, her parents, her childhood, and then her healing. She says she is the worst Buddhist in the world because she has trouble sitting still and paying attention.

In the introduction she apologizes at length for having a crisis as a happily married and successful career woman when other people have real problems and real traumas. Then she describes her childhood family’s real problems and real traumas. She did have a fairly ordinary college career and young adulthood, at which point I put the book aside in frustration at its circular approach to the initially-described crisis.

I did pick it up again and read quickly through her healing approach, which included slowing way down, spending a lot of time in nature, trying yoga and massage for the first time, and meditating. She notices her vicious self-critic who cares about whether she is helping others but not about whether she is happy. With time and attention the critic mellows and she comes to a place of more acceptance for herself as she is.

I wish she had noted in her introduction that comparing our crises and traumas to other people’s is a tool of self-criticism rather than compassion. Swallowing our pain because someone else has been hurt more helps no one.

Recommended to me by: Keelin Anderson

To tell her story of healing from incest and emotional abuse, Keelin Anderson weaves together daily narrative, fiction, quotes, tarot readings, and dreams, all in present tense.

As I read, I saw places where our paths have overlapped, and places where they have diverged. We have both struggled with finding respectful healers to help us, and have vowed to be respectful of our own clients and their individual processes.

She consciously decides to invite spirit guides into her process. I did that for a while, but found that not all spirit guides are trustworthy, and I was better off looking within for guidance. I think there are many ways of contacting Spirit and healing.

Subtitle: How I Lost the Mormons and Found My Faith

Recommended to me by: Reading Martha Beck’s older books

I first read this years ago and loved it. I came back to it while writing a (forthcoming) article about spiritual abuse and faith. Since I last read it, I read her newer book “Steering by Starlight” and saw that her latest book is about weight-loss, so I started re-reading with trepidation. I still like this one, though!

She also talks about her personal search for faith, first as the seeking camel, then as the discerning lion, then as the innocent, playful child.

In her last act as a practicing Mormon, she spoke to a huge crowd about domestic violence. “If something I said feels right to you, believe it. If it feels wrong, disbelieve it. The choice to believe or disbelieve, that’s what makes you free.”